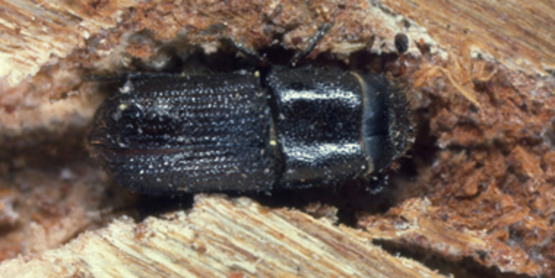 Up close view of the Southern Pine Beetle within the cambium of a pine tree.

The Southern Pine Beetle (SPB) is a bark beetle that is about the size of a grain of rice that is native to the Southeastern region of the United States. SPB vary in color from a red-brown hue to black. The first SPB found in New York State was located in Suffolk County in 2014. SPB’s distribution and infestations are present on Long Island in Wertheim National Wildlife Refuge, Connetquot River State Park, and the Henry’s Hollow Pine Barrens State Forest. There have also been individual SPBs found in Bear Mountain State Park and Minnewaska State Park in Orange, Rockland and Ulster counties, respectively.

The Southern Pine Beetle feeds on all pine trees including pitch, white and red pine as well as hemlocks and spruce trees.

The adult SPB enters a pine tree through crevices in the bark and creates S-shaped tunnels in the tree’s cambium tissue which affects the flow of nutrients and thereby killing a tree within 2-4 months. Trees affected by SPBs secret a resin to “pitch out” the beetle but once a tree is infested, this natural defense mechanism proves little use.

Populations of SPB follow a natural ebb and flow and can go unnoticed for years in low populations and explode in high populations, killing an entire landscape, as seen with Long Island. The factors that determine population numbers depends on the availability of dense pine stands, the number of natural predators to the SPB and changes in climate, among others.

Total eradication of SPB isn’t likely because of its widespread approach throughout the Northeast. However, management efforts for this invasive species include aerial and ground surveys, cutting of infested trees, and thinning of uninfested trees. Infested trees cut in the winter can reduce the population by killing the offspring that was dormant within the tree. Thinning tree stands is also beneficial by increasing the distance between trees which can prevent beetles from communicating, via pheromones, to nearby beetles that can kill the tree with enough numbers.

The following websites and publications provide regularly updated information on the SPB, its identification, spread and management practices.

Southern Pine Beetle Fact Sheet[PDF], DEC. This PDF Fact sheet outlines useful and relevant information about SPF and how it affects Long Island and how residents can help control the spread of SPB. 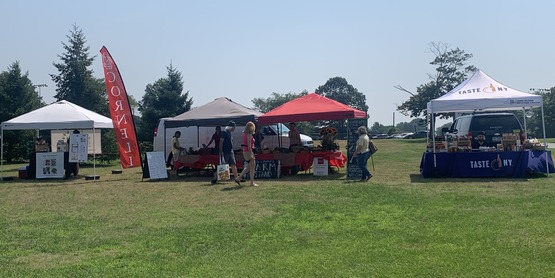